You are here: Home / News

Good day to you!

I’m delighted to announce that I have a new release. It’s an Ancient Quest Mystery called The Lost Metal Library, & features Rick Braeden from Lost City of Gold. It’s a standalone archaeology adventure novel, & like Lost City of Gold, the story was inspired by real events & facts. The research for this book was both fun & fascinating. I thoroughly enjoyed writing it!

Here’s a little about the story:

Deep within Ecuador’s rainforest lies a vast subterranean world, and an incredible, yet dangerous secret…

The Tayos Caves System in Ecuador is one of the most astonishing, yet mysterious places on earth. It hides wondrous secrets, both ancient and deadly.

Rick Braeden has heard rumors of what treasure these hidden caves might hold, potentially one of the greatest discoveries of all time. Driven by a desire to prove himself and write his name into the history books, he hopes to uncover the truth of The Lost Metal Library and bring this discovery to light.

However, a shadowy enemy also seeks to possess this discovery and will let nothing, and no one, stand in their way.

Seeking this place of untold wonder may give Rick everything he ever hoped for, or cost him everything, even his life…

The ebook & paperback are currently exclusive to Amazon, because I’ve entered the book in their Kindle Storyteller Competition. It’s my first time entering one of their contests, which now also allows me to have the book available in Kindle Unlimited. Here’s the link to the book, which should take you to the Amazon store for your country:

I hope you give it a read & that you enjoy the adventure! If you do enjoy the story, posting a review on Amazon, Goodreads, and/or BookBub would be most appreciated! It really helps the book’s visibility & gets the word out about the story.

Speaking of reviews, here’s one of the latest:

“The nervous and scared, yet determined, foursome headed out onto the highway, for the long, almost four-hour drive east from Cuenca, nearly all the way to the border with Peru. Into the rainforest and into the unknown. Hoping against hope that all was not already lost.” Rick Braeden vows that he will be the one to find a mysterious lost metal library, filled with powerful ancient and otherworldly knowledge. It’s located somewhere in the Tayos Caves system in the rainforest of Ecuador. Unfortunately, a powerful organization is also interested in the ancient site and they are willing to sacrifice lives to find it. The Lost Metal Library is the second installment of the Ancient Quest Mystery series by Rai Aren.

Set in the region of South America that is rich with history and biodiversity, the story premise of The Lost Metal Library uses both facts and fiction in this fast-paced and well-developed plot. With a combination of actual locations and a fictionalized ancient site, the world-building is sufficiently vast for characters who have their own agendas; the protectors, the rescuers, the power-hungry organization, the one who seeks personal justification, and a complex antagonist who’s looking to achieve unlimited success. As the clear and engaging narrative contributes to the story’s sense of suspense and mystery, the way the power that resides in the ancient library affects the characters differently is fascinating; the knowledge it offers is unlike one would expect. Simply put, this second volume of Rai Aren’s Ancient Quest Mystery is a great read for fans and newcomers alike as its ending promises more archaeological adventures for Rick and his newfound friends.

Thank you for your time 🙂

I just wanted to share the very cool feature I’m a part of on Instafreebie’s blog. I’m honored to be a part of it with my archaeology adventure novella Lost City of Gold, and share the space with two other authors. I’d be delighted if you checked the feature out. Here’s the link:

Many thanks to the fine folks at Instafreebie for including me. They’ve been great at helping authors connect with interested readers 😀 👍 📚

I hope your summer was an enjoyable one. It sure went super fast, didn’t it?

No matter the season, I love to read, it’s an important part of my day that I look forward to. In that spirit, I’m really happy to share this fantastic new Instafreebie giveaway. There are over 200 free books, book samples, and short stories, across multiple genres included! 📚

The giveaway runs until Sept30th. It’s also nicely organized by genre and story length, so it’s easy-breezy to browse and find what you’re looking for 👍 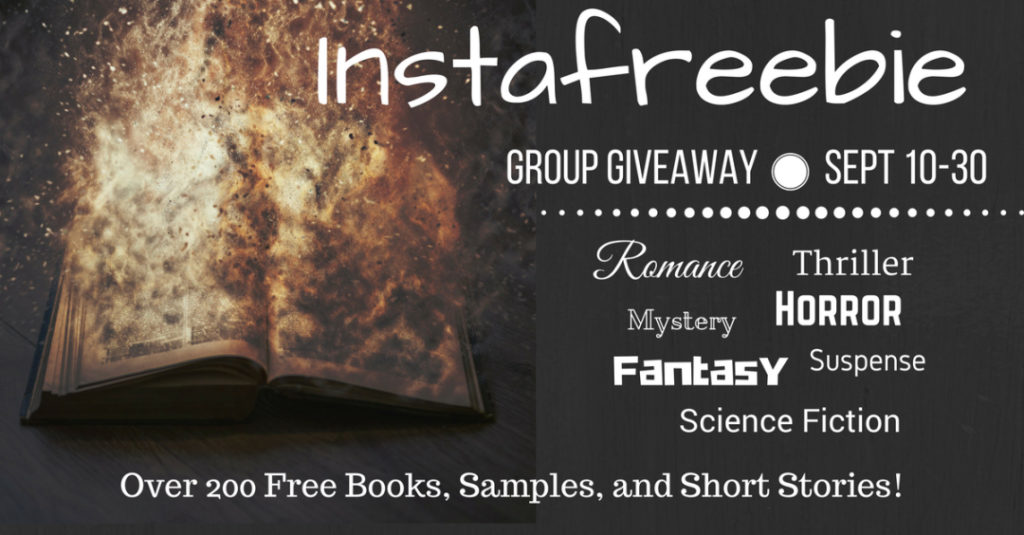 I hope your summer has been a pleasant and relaxing one 🌴 🌞 If you’re like me, reading is an important part of the day, no matter the season. I love reading, it’s very relaxing, and getting lost in the pages of an intriguing story is great fun, so I’m always looking for interesting books to fit my tastes. I’m sure you are, too.

In that spirit, I’m delighted to share this new free ebook promotion I’m participating in📚 There are over 230 books across 13 different genres – something for everyone! 😀

Just click on the link below to get started:

This is a great opportunity to load up those e-readers, try out some new authors, and get lost in some fascinating new stories. Enjoy & happy ebook discovering!

Good day to you!

I hope you’re having a nice spring. For me, no matter what time of year it is, or what the weather is like, reading is an important and fun part of my day. It’s the most relaxing part of my day, too, and I always look forward to it. I need it. It’s a chance to have some quiet time and recharge for awhile.

I’m happy to share this latest #instaFreebie giveaway from you. There is a selection of novels, short stories and previews all selected to be from a different part of the world 🌎 📚 Go on some international excursions with these interesting reads! They’re available for a limited time, until June 11th – just click on the link below to get started:

I’m really pleased to be a part of a unique book promotion where you can get to know a whole bunch of quality authors, who have put together some fantastic special offers for you. These include free works and discounts. The genres should be right up your alley – they are crime, mystery, thriller, and suspense. Load up that e-reader and have tons to read this weekend and beyond! 😀

This is a super nice promotion – a lot of work went into making it very informative and easy to navigate for you, so you can select books that really appeal to you. Easy breezy!

The offers are good until Friday May 12th, so do hurry on over and check them out! Just click on the link below to get started.